Intel has been at the top of the processor game since quite some time. Since last year’s Skylake family of processors the price to performance ratio has definitely improved and so has the power consumption and heating dissipation of these processors. Now Intel has announced the latest upgrade to its processor line up in the form of Kaby Lake architecture processors. Let’s discuss the 7th Generation Intel Core processors in detail. These processors will have quite significant changes from the last generation.

First let’s discuss the architecture and processor layout in detail.

The 7th gen is still based on the 14 nm process architecture but improvements are significant as Intel has used an improved Fin profile, improved silicon process. Intel is calling the architecture 14 nm+ for the same reasons. They have also used improved transistor channel strain. All these hardware design improvements make sure that power consumption is lower than ever and the performance gains are in double digits.

The greatest hardware changes are in terms of dedicated media blocks for graphics in the 7th generation Intel Core processors. The Multi Format Codec (MFX) and Video Quality Engine (VQE) are the ones that have seen significant improvements. Let’s take a closer look at what has changed in these two units.

So what does this mean for the end consumer, how much media can these newer processors handle? Read on to know the answer.

Battery life has also seen a significant gain because of this and now even with 4K video playback users can get significantly better battery life than the 6th gen processors. 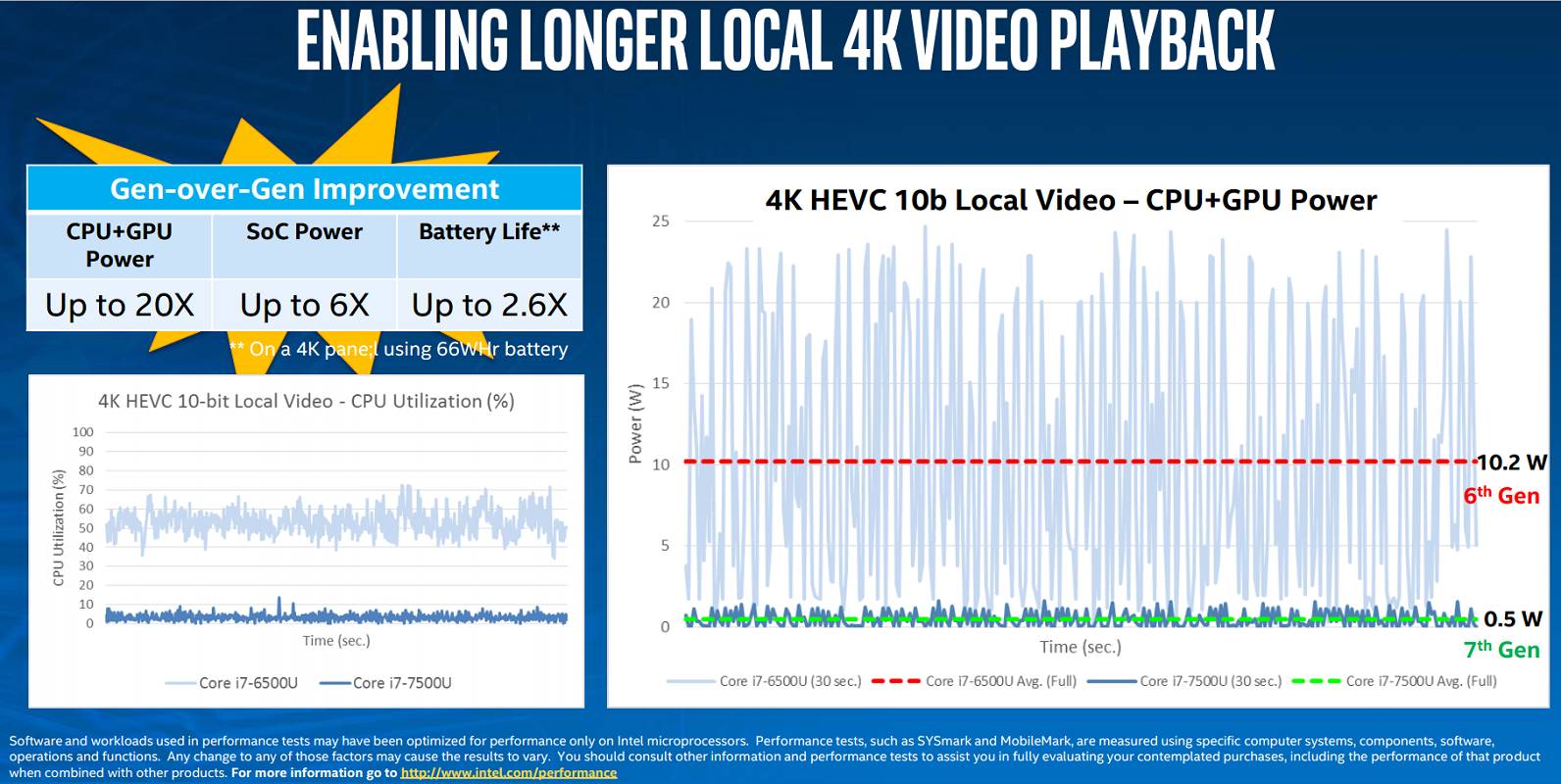 With added support for HEVC 10-bit and VP9 even 4K video streaming is a lot easier than before. Here’s a graph showing the battery life when streaming 4K video content from YouTube with VP9 codec. 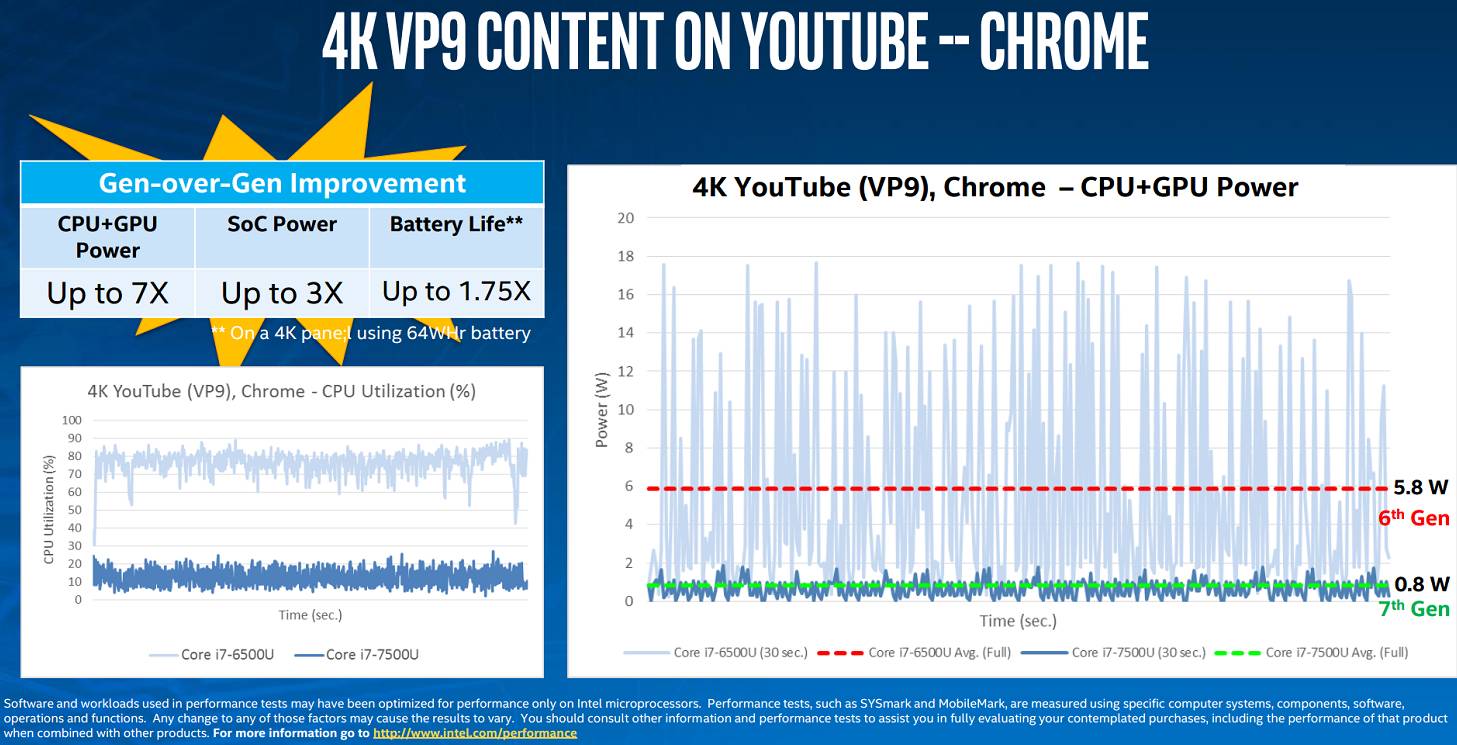 In terms of media capabilities the Intel 7th Gen core processors also have the following improvements over its predecessor.  Up to 4K UHD video streaming with a claimed battery life of 9.5 hours using HEVC 10 bit. It also supports 1.75x longer video playback battery life than before using VP9 (like on YouTube), which means around 7 hours  of battery life with 4K streaming of VP9 content. You can also view 4K 360 content streams along with support for additional file formats.

There will be a lot of new products hitting the market soon with the KabyLake processors. The thinnest convertibles are around 10 mm in thickness! Clamshell models would also be thinner than 10 mm. Fanless detachable laptops/2 in 1s would be even thinner at less than 7 mm!

How faster are the U and Y SKUs compared to the last generation?

Intel has released official data and it states double digit gains for both web performance and productivity tasks. This has been possible because of improved clock speed on the KabyLake along with enhancements to Intel Speed Shift and Turbo boost technologies.

For video and content creators too the graphics boost has put in some serious encoding/decoding gains. Now 4K video editing and rendering would become even easier with the 7th gen processors. 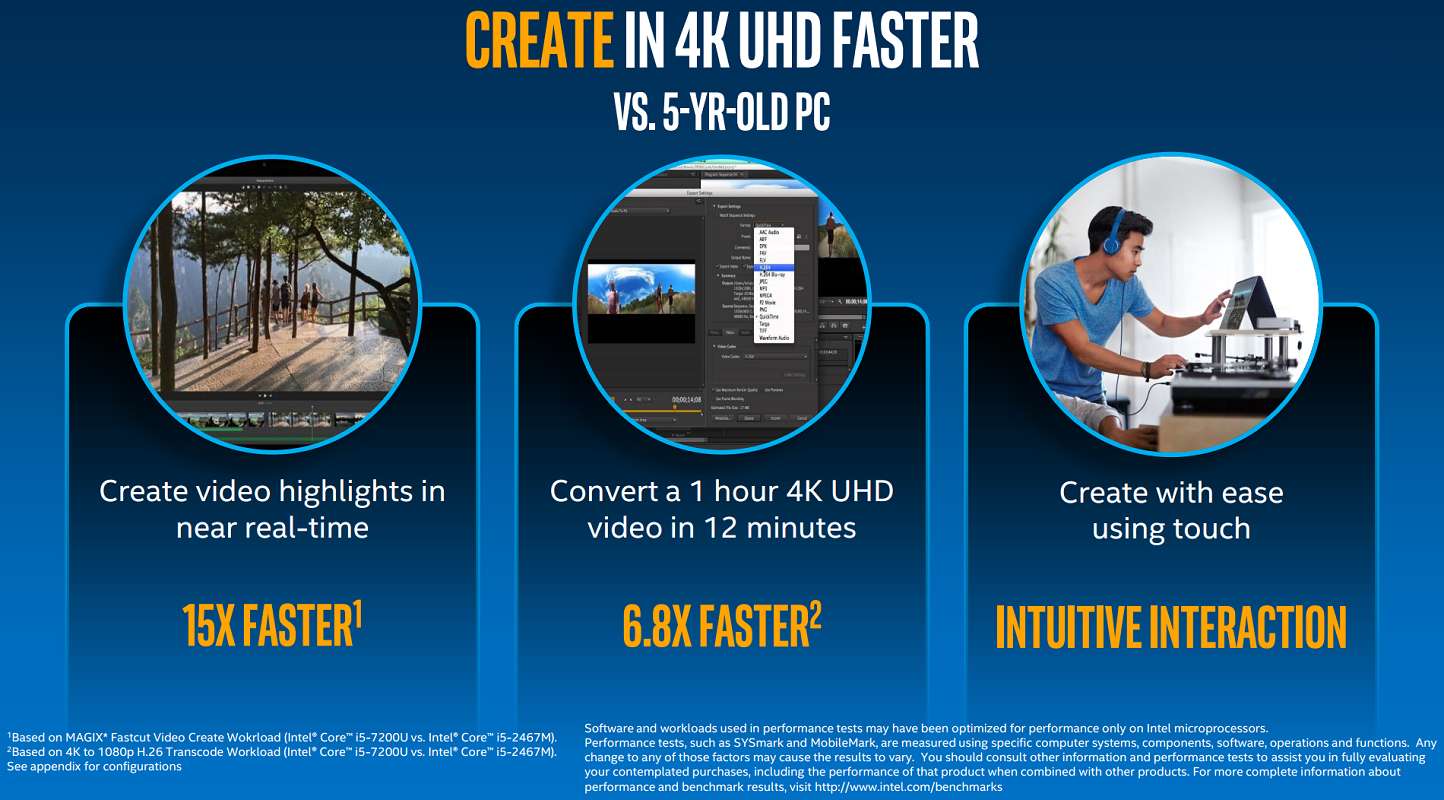 But one major thing to be noted by everyone is that all these numbers and data is for the new U and Y lineup of processors i.e. Intel Core processors ranging from 4.5W to 15W. These processors would all be used in ultra thin notebooks and portable 2 in 1 solutions.

The enterprise, workstation and Intel Iris Graphics and enthusiast grade notebooks and desktop products would be launched much later in January 2017.

By the quarter 4 of 2016 more than 100 designs from the KabyLake ultra portables and other lineup would be out and more powerful offerings would come later in the next year.

To distinguish the 7th gen products from the previous lineup Intel’s going to put a specific 7th gen tagline on all of it’s branding and stickers on products too. This would enabled consumers to easily differentiate between older and newer offerings by Intel.

Here’s a video we did for those people who don’t like reading and would rather prefer to be notified in a visual format.

So what do you think? Are you excited about the 7th generation core processors lineup by Intel? Do let us know in the comments section below.

Keep visiting for more such awesome exclusive news, internet tips, lifestyle tips, and remember we cover,
“Everything under the Sun!”