The Google Chromecast is an incredible device, it lets you stream your favourite shows and movies and music videos from hundreds of different apps and websites like YouTube and your other devices to the biggest screen in your home, i.e the TV Screen. Through it was also available earlier in India, but you had to import them from USA or ask your NRI friends to bring it with them. There was the option to buy it from Amazon.com but without any official support in terms of content and streaming. But now the Chromecast officially launched in India for INR 2999 only exclusively on Snapdeal.

The Chromecast make your phone and tablets work like a remote to control and play – pause the streaming and you can multi-task too. In India, Chromecast currently supports many apps like YouTube and Google Play Movies, and also content from partners like Spuul , YuppTV and Eros Now — Your destination to famous Bollywood and regional movies and TV shows on-demand. Celebrating the launch, Airtel and Eros will be offering Chromecast customers a range of subscription and content bundling options.

Chromecast Airtel Partnership
Google has partnered with Bharti Airtel for pushing the Chromecast in India. The existing customers of Airtel who are buying Chromecast will be given 20GB of free content per month for 3 months as a part of a special promotion. 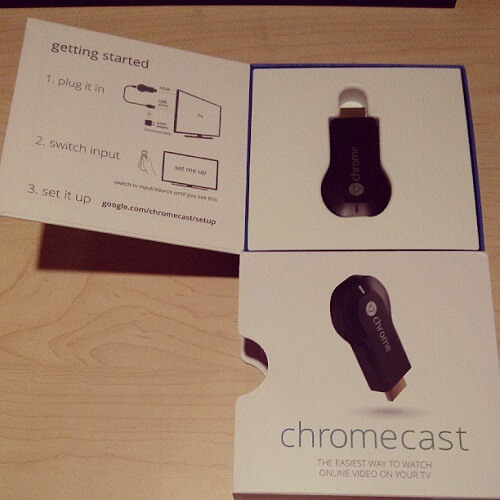 For the  new Airtel customers, the activation charges of Rs. 1000 will be waived off. Google knows about how unlike in other countries, bandwidth and data is a serious issue in India. With Airtel partnership, they have just ensured that many consumers may adopt Chromecast due to free bundled data.

Chomecast users will also get a 2 months free subscription to ErosNow for all of their content.

Like the other Google offerings, Chromecast has its own open source SDK (Software Development Kit) and app developers can integrate their existing apps that will enable them to cast their content on large TVs. Google has  officially launched Chromecast in India for a price of Rs. 2999/-. Exclusively at Snapdeal.com and Google Play Store.

Keep visiting for more awesome device launch news and articles and remember we cover, “Everything under the Sun!”