InFocus is making waves in Indian Budget Smartphone market and now they are back with a new stunning looking device, InFocus M810. A sleek looking Smartphone listed on Amazon at INR 14,999, here’s a full review for the M810 with focus on its various features and pricing.

The phone comes with a metal frame and with a golden matte finish, InFocus 810 gives its user a royal and “carrying a stylish“Smartphone feel. Measuring 153.70 x 76.20 x 6.99 and weighing 161 grams, the phone might feel a little heavy as compared to existing Smartphone devices with same features. A protective glass cover protects front as well as back panel. The speaker of the phone is placed below back-lit buttons and Micro USB and audio jack is also placed at the bottom and the power button is round and crowned a bit to give a different look altogether to the device. 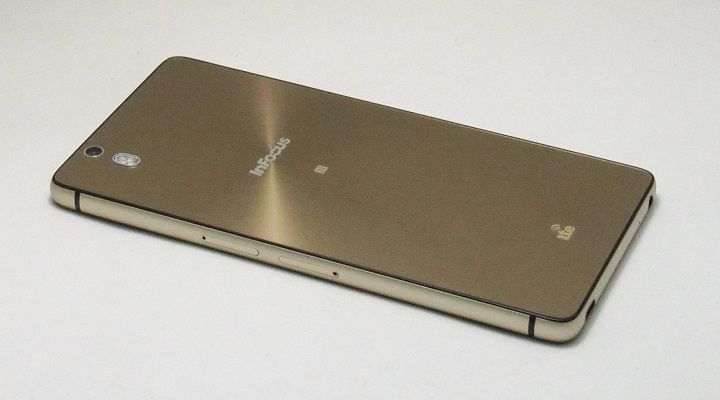 There are two slots available, one for the micro sim and the other one which holds memory card. Dual Microphones for noise cancellation are also present for clear voice quality. The device comes with 5.5 inch screen with full HD 1920 x 1080p resolution. Also, there is LED notification at the bottom of the phone. But the anti reflective cover trumps up badly when in use. Also there is no surety about the quality of glass that covers the phone making it prone to scratches and smudges including the back panel.

InFocus M810 comes with 2.5GHz quad-core powered by Qualcomm Snapdragon 801 MSM8974AC. The device has ample internal storage, with 16GB and a RAM of 2GB. The internal storage is expandable up to 64GB using a micro SD card. But despite Snapdragon 801, the phone might lag if you indulge into some heavy gaming and extensive multitasking. The phone runs on Android 5.0 which is upgradable.

InFocus M810 comes with 13 MP rear and a 5MP front camera. Camera quality is average and the hardware of the phone can allow it to capture 4K video but then that option is not available. The back camera clicks decent quality pictures but sometimes fails and makes the images look pixilated. Also, results will be either average or poor in dim light. The front camera image quality is also average. Additional features Wink to shutter and Smile to shutter is present but there is not much use for them. But as compared to InFocus M530, the camera is really disappointing.

With a 2600mAh battery, the phone’s juices keep flowing till the end of the day, surprisingly, even if you have used your phone extensively on low battery levels also. The phone comes with 4g LTE connectivity which seems to be a must feature in upcoming smart phones. But then this feature might be restricted in some areas, especially during roaming.

This is the full benchmarks video for the Infocus M810 smartphone where in we have tested almost all of the benchmark applications for this phone!

This is our full review video for the M810, you can find camera quality samples, audio quality, call quality and gaming etc. discussed in detail over here!
This is our comparison video of Xiaomi Mi 4i vs Infocus M810.

Keep visiting for more gadget reviews, news, how to guides, lifestyle tips, and remember we cover,
“Everything under the Sun!”

Shreya vaid is a Bibliophile, food lover and a wild child! Currently working as an HR professional and trying to make a name in this big world!