Although the 14nm product line by Intel also includes Comet Lake and Rocket Lake. The name of the 10th generation Core is still given to Ice Lake. It’s the first generation of Intel’s 10nm client processor.

In addition to the 10nm point of view, Ice Lake also uses the Sunny Cove CPU architecture, 11-generation graphics, etc. It should be said that it is a generation of great changes. According to Intel, the Ice Lake processor (low voltage) has been mass-produced now. And the related thin and lightweight ultrabooks and other products using such processors will be listed in the third quarter. 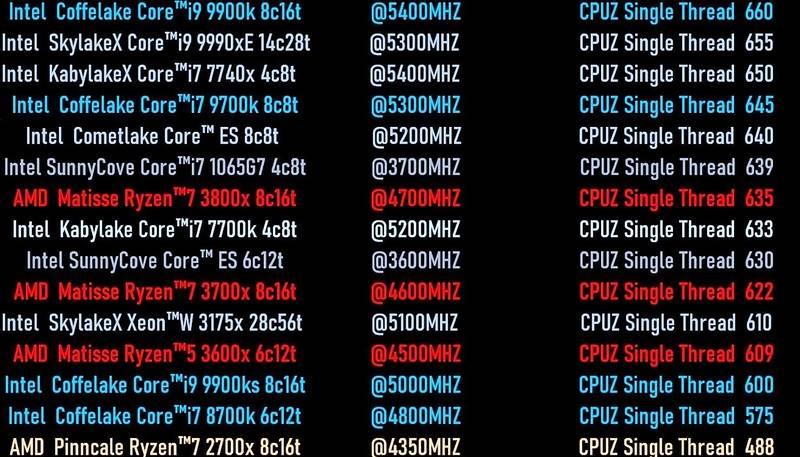 It seems that Ice Lake doesn’t seem to be that elusive anymore as more and more leaks are coming out. So what is its actual performance like?

At the Taipei Computer Show conference, Intel said it has an increase of 18% in IPC (instruction per clock cycle) and up to 40% in comparison to Skylake.

This week, there was a CPUZ single-core performance leak online which showed some new info. There were several Intel and AMD new SKUs. These included the 10C i7 (Core i7-1065G7) of 4 cores 8 threads and the 10th generation ES engineering CPU of 6 cores 12 threads.

First looking at Intel, although the two Ice Lake models only have a frequency of 3.7 GHz and 3.6 GHz. But the single-core score now touches 630+. This is way better than the 5 GHz 9900KS (has around 600 points) and the 4.8 GHz 8700K (around 575 points). A simple estimate can corroborate Intel’s claims of over 40%+ improvement compared to the Skylake era.

So guys what do you think after looking at all of these benchmarks? Does Intel still have a fair chance with the push to their new 10nm process? Do let us know your thoughts and opinions in the comments section below!