Motorola launched an innovative project called Moto maker back in 2013. And then it launched a new concept phone in Moto series that was Moto x (2013), now known as moto x 1st gen. A compact phone with stock android experience and lots of amazing features like touch less controls and active display, plus in United states the moto maker allowed you to choose your own colors and skins for your moto x. But not taking stock of all that fun people had customizing their phones, this wasn’t a big  issue. Back in the end of 2014 Google released android L that was lollipop update, 5.0.1 was released for all nexus and motorola phones except moto x 1st gen. The people using this phone waited for a long time. Also many people were angry with Motorola as all lower end phones also started getting android L update but not the Moto x.

Why was the lollipop update for Moto x 1st gen delayed?

The users were really angry and wanted the materialistic design on their devices too!

Sooner or later as it was too late and users were very angry. Cyanogen mod a professional rom creator, released cm12 version based on lollipop for moto x 1st gen. Although this rom had too many bugs it  actually helped tech savvy people using Moto x 1st gen to get a lollipop experience on it. Though, the not so geeky people ended up unsatisfied with 4.4.4 on their Moto x devices but as you know the popular pre release tweeter @rogers released a list of android phones getting Android in march and april. Moto x 1stgen was luckily one of the devices in the list. Moto x 1st gen users were really happy and excited to know about this. I also cross checked him by tweeting a notice and he replied that  Moto x1st gen will get a lollipop update!

But some of the people didn’t really care about Roger’s list. Also the developers at Motorola got really excited about it and as always +LucianoCarvalho a Motorola developer leaked the news that Moto x 1st gen on lollipop will get all features based on software from Moto x 2nd gen which was indeed very cool! 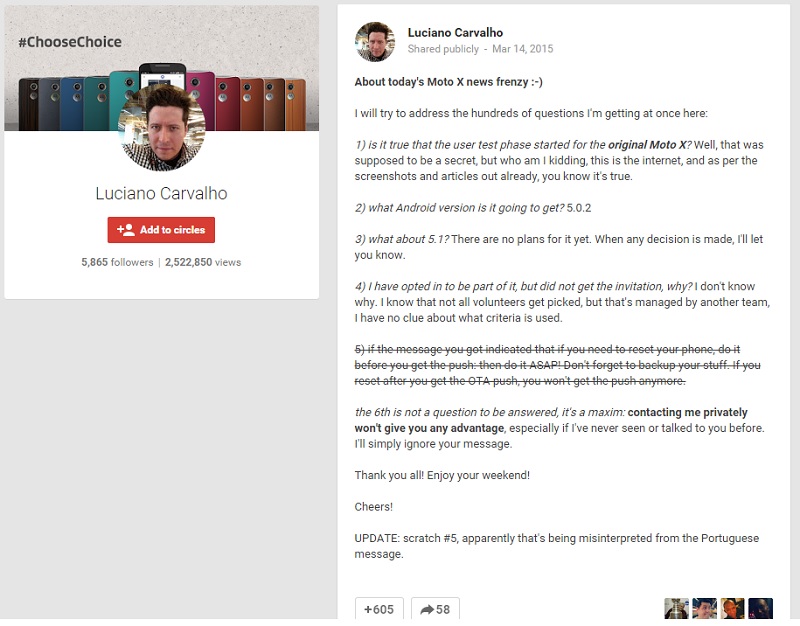 Although he told this that the users were still unsatisfied and stopped bothering about lollipop for moto x 1stgen as it was really very late. But in the first week of this month one of my friend’s from UK mailed me that he had received a mail for a soak test as he was also a moto x 1st gen user. I didn’t really believe him at first not knowing. But he actually sent me some screenshots!! Yeah you heard it right screenshots of lollipop on moto x 1st gen. I thought he was just kidding me with CM12 but then again the legendary + Luciano Carvalho posted that Moto x 1stgen users are getting lollipop. So it was almost official news for all Moto x1stgen users that they are getting lollipop update this weekend!

So it was real and now its official that moto x 1st gen users are indeed getting lollipop update on their moto x 1st gen devices, so geeks are you excited  about screenshots we have?

The initial screen after the update!

Ok now you must be really excited about this. What can we expect in lollipop for moto x 1st gen?

How can you get it?

Go to play store and update the Motorola update services and poof! This weekend you will get a juicy Android lollipop update on your moto x1 st gen!

to download the update from!! It’s the official Brazilian OTA soak test which can be used by any Moto X user!

DISCLAIMER: Use the official soak test at your own risk, we are not liable for any harm that may come to your device!

Well guys the time has come to show off material design on your devices. If you are one of the Moto X 1st gen users then lollipop has touched your doorstep, don’t expect much as it’s the first update so they are trying to remove bugs, geeks lets roll!

UPDATE: Guys and girls it’s fully official now, here are the leaked screenshots from the US build of Lollipop for the Moto X!

Comment your views about lollipop on your moto x 1st Gen and tell how eager you actually are for this update! Share the happiness with your friends on facebook!

This is Supreeth your new geek here! Stay tuned to Inspire2rise.com B|

Keep visiting for more awesome device news, gadget reviews and remember we cover, “Everything under the Sun!”