After being in the news for it’s buyout, Nokia has launched a brand new feature phone handset Nokia 108. It’s aimed at the masses. Considering the fact that Nokia is already doing well in the budget range with it’s Asha series, it all seems like a strategic move. Nokia is trying to make a foothold in the market where it has always been a champion. Let’s delve into more details for Nokia 108 specs and price in India.

Nokia 108 specs and price in India : Details and specifications

The Nokia 108 will be available in two variants upon its launch. A single Sim version and a dual Sim version. It’s expected to be the first sub 2,000 camera phone by Nokia.

The phone has a 160×128 pixel, 1.8 inch LCD display. It comes with a VGA camera, reportedly a steal for the price it is retailing at. The camera is capable of 2x zoom and allows users to click photos and take videos in native 3gp format. The phone has Nokia’s slam technology which allows easy sharing of pictures with others.

The phone has 4 MB RAM. The Nokia 108 also supports expandable memory via micro SD card. The phone is equipped with Bluetooth, music player and FM Radio too.
The Nokia 108 has a 950 mAh battery. Nokia has claimed that the battery can last up to 31 days when the phone is on standby. The Nokia 108 promises to deliver 13.8 hours of battery talk time.

The phone will be available in a wide variety of colors, as has become standard Nokia routine. ( Which seemingly has been copied by Apple while launching iPhone 5c! 😛 ) The available colors are red, cyan, yellow, white as well as the standard black color. 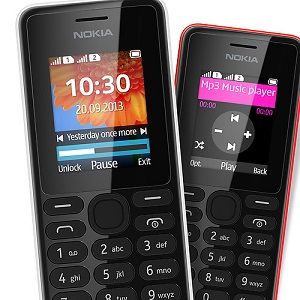 The phone is expected to launch globally in quarter 4 of 2013. But it is still unclear with regard to the launch date in India.