Previous Next
OnePlus, the premium Chinese smartphone brand known for their specs-heavy smartphones launched their latest entrant to the One Plus Series in a grand event held in Mumbai Today.
The new One Plus 5 as it named is also the new flagship device of the brand and is very heavy in the specs department. This new device will be available for customers in 2 models; the 6 GB RAM, 64 GB variant for 32,999 and the 8 GB RAM, 128 GB variant for 37,999 in Indian markets.
There was already a lot of buzz in the market regarding the OnePlus launch with lots of leaks all over the internet. Let’s have a look at the specs and see if the buzz was justified. 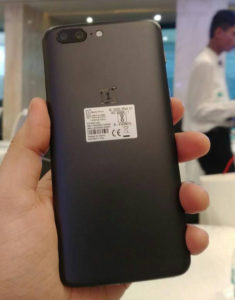 The new OnePlus 5 have an Optic AMOLED capacitive touchscreen of 5.5 inches full HD and comes in two memory variants, 6 GB RAM with 64 GB internal, and 8 GB RAM with 128 GB internal, both of them without external memory support. The Processor, Snapdragon 835 is strong enough to run anything on your device smoothly, you won’t feel any sort of lag, but there’s a problem.

When the first pics of OnePlus 5 were released, people observed an eerie similarity in looks with Apple’s Iphone 7. Although I personally don’t find any similarities except the camera being in the same position. But it’s internet folks and every rumor here spread like wildfire, so the damage is done. There are two cameras in the rear in the new OnePlus 5, a 16-megapixel shooter and a 20-megapixel shooter, both being f/1.7, 24 mm and f/2.6, 36 mm respectively. The front camera is 16 megapixel f/2.0, 20 mm. All of them were excellent in the limited shots we saw.

Truth be told, the specifications of the new OnePLus 5 makes it a great buy. The design of the device is also nothing like iPhone and is very subtle and fine. The processor is also good and the device looks great on papers. The prices for both the models are in a bit high category and that may turn off some customers but otherwise, it is a great device to buy.