OnePlus X was launched this week worldwide and it has been a much refreshing change from the slew of poorly built devices in the mid range region. Within three months of launching OnePlus 2 in India, Chinese smartphone maker has now launched One Plus-X, a small segment 5-inch display phone with 3 GB RAM and Snapdragon 801 chipset. Surprisingly, the company has surpassed their policy of launching “One apple like device a year”. Also, we heard no such speculation about this device when OnePlus 2 was being launched.

Making the statement on same, the GM, Vikas Agarwal said,

“We did not want to reveal our plans of launching the X version when one plus two was being launched. However, OnePlus X was always in our agenda. And it is not a run-of-the-mill product that we have launched in haste”.

Moving over, here’s a quick sneak peek along with videos of this latest device:

The device will have two versions- Onyx and Ceramic. Both the version has the same set of specifications. The Onyx has a black glass rear panel over a metallic base. Ceramic version comprises of scratch resistant ceramic back. 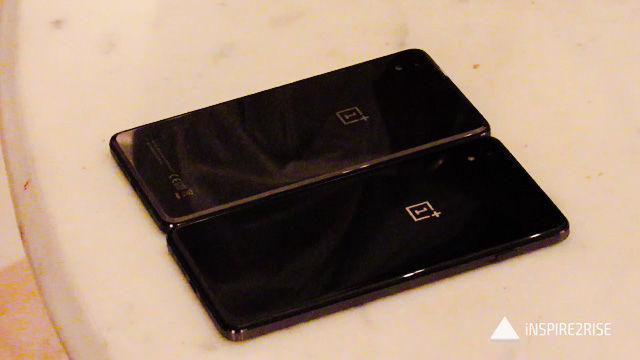 OnePlus X weighs about 138 gms and Ceramic weighs about 160 gms, making both the phones a little lighter and easy to handle. The display of the device is a 5 inch full HD AMOLED display with 1080P, which is a first for OnePlus. It has Corning gorilla glass 3 protection which will save the phone from unnecessary scratches. There is a separate sim tray available for sim card slots as well.

The overall build of the OnePlus X can be compared to the iPhone 4. We know that this is not the first time the build of a phone is being compared to iPhone, but when you keep the phone in your hands and see the placement of keys, you will believe us. The 6.9mm thickness helps you in easy handling of the phone, making it not so bulky. To curb the slippery nature of glass/ ceramic finish, there are micro cuts in the frame. The only negative point of the design was that you will smudges all over the phone while on a call. You will see your sweat, fingerprints etc and you will constantly keep on wiping it.

Loaded with 2.3 GHz quad-core Qualcomm Snapdragon 801 chipset, OnePlus X has Adreno 330 GPU. It has 3 GB RAM, LPDDR3 storage. The internal storage available is 16 GB which is expandable up to 128 GB through microSD card. It comes with Android 6.0 in the form of Oxygen OS, which has brought some changes that might attract the One Plus community. But when you have a closer look, the modifications are close enough to the pure android experience only. Some of the things that we noticed are that you can change the function of buttons, change themes of the phone from black to white, and placement of icons in notifications panel can be made easily and within the notification only. Switching between apps is smooth and the phone hardly lags anywhere. Though we still have to run more benchmark tests to give you a clear picture. On the Antutu as Nenamark 2 benchmarks we got above average scores.

OnePlus X comes with a 13 MP ISOCELL 3M2 CMOS f/2.2 camera with Flash and a front camera with 8 MP and f/2.4 aperture camera. Both the cameras can be rated as decent, the primary camera has a really fast focus speed. The shutter action of both lenses is pretty fast, the interface is simple and auto mode will give you no complaints. The camera on the OnePlus X can also be rated as one the many good cameras of the year 2015! The only low point is when you try and use it in low light. You might face some difficulty because the auto focus won’t do justice in these scenarios. Overall, the cameras are good enough.

Here are few of the sample shots taken from both of the cameras of the OnePlus X:

The battery of OnePlus X is about 2,525 mAh, which a little less. We expected the battery of about 3,000 mAh plus so that one can enjoy more with this device. But may be further versions will prove better. In this aspect the OnePlus One is still a better phone as it has a better battery capacity as well as standby time.

Here’s a detailed hands on review of the OnePlus X with focus on camera performance and benchmarks:

Keep visiting for more such gadget reviews, news, how to guides, lifestyle tips, and remember we cover,
“Everything under the Sun!”