Earlier we have covered that RealMe was going to come up with two new models soon. What was known at that time was that one of the devices was going to be a bezel-less device while the other might have a different form factor. Now there’s fresh news that RealMe is going to launch the RealMe X and RealMe X lite smartphones on May 15 in China.

This was confirmed from a Weibo post about the same, which can be seen below. 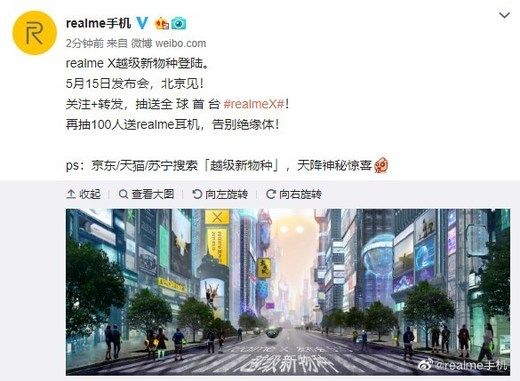 Previously, the Ministry of Industry and Information Technology website of China had two mobile phones with models RMX1901 and RMX1851 listed. This made it possible for the two models to be the upcoming new machines to be released by Realme.

According to previous media leaks, RealMe X mobile lineup will have RealMe X and Realme X Youth version. The RealMe X mobile phone will come equipped with a Snapdragon 855 processor. The RMX1901 should be the standard version of RealMe X. It uses a full-screen design without any notch or any cutout. The back uses a mid-range vertical double camera design. The realme RMX1901 features a 6.5″ display with a battery capacity of 3680 mAh and body size of 161.2 x 76 x 9.4 mm.

The video above was a promo video which was already out. From that video it was clear that the RealMe X would come with a popup selfie camera and the design would focus on the full-screen experience.

The official announcement on Weibo also stated that the device would be available for pre-booking on multiple Chinese retail outlets like Suning, TMall and JD.com. The official launch would take place in Beijing and we will bring you more relevant details as and when they come out!

So guys what do you think? Is there a chance for the RealMe X and RealMe X Lite to come to India? Do let us know in the comments section below!