Yesterday, DxOMark announced the Samsung Galaxy A50’s camera score, with a total score of 83 points it has got the same score as LG G7 ThinQ and Sony Xperia XZ Premium. If we consider factors like slightly affordable pricing and a few other things then it definitely packs a good camera for the price. 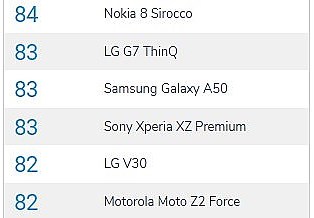 The Samsung Galaxy A50 DxOMark score was 85 points for photos, and the video score was 79 points. This gave it a total score of 83 points.

DxOMark said that the Samsung Galaxy A50 which uses a 6.4-inch AMOLED display, Exynos 9610 chipset and rear three cameras, is good enough to make budget-sensitive smartphone enthusiasts excited. However, under the harsh conditions of low lighting and few other scenarios, the A50 is not comparable to the performance of some of the best mid-range equipment and certainly does not meet the image quality of the latest flagship products.

In sunny conditions, exposure, dynamic range and colour are good, and bokeh shooting is acceptable. However, in cloudy or low light conditions, the still images and video quality are not very good. The lack of telephoto sensor is also a weakness.

You can watch our Samsung Galaxy A50 review and unboxing videos below:

So guys a few months later after its launch the Galaxy A50 is still a solid smartphone for a lot of users. There have been some notable other smartphones like the Xiaomi Redmi Note 7 Pro and the Vivo Z1 Pro in the similar price range.

But the thing is that things like an AMOLED screen and a few other features are firsts in this price range and only offered properly by Samsung. So guys what do you think about the camera performance of the Samsung Galaxy A50? Do let us know your opinions and thoughts in the comments section below! Don’t forget to subscribe to Inspire2rise for more timely tech news and other updates!