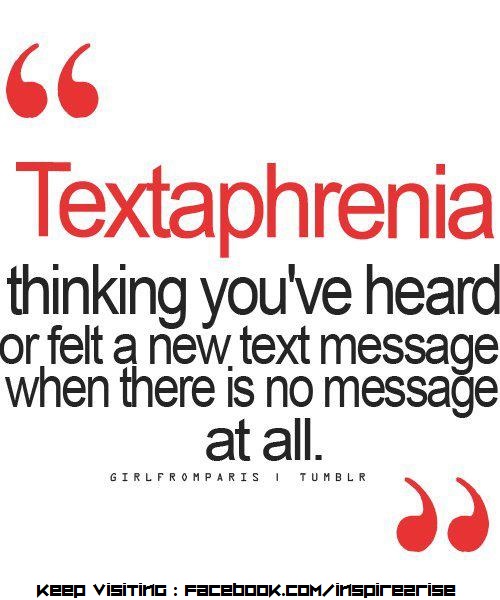 Before defining Textaphrenia, We would like to ask -Have you heard this term before. Well I am 100% sure that most of you haven’t. So what’s this talk all about why the fuss. Because this disease is something that will become too prevalent in the days to come.

So what exactly is Textaphrenia?

“Thinking that you have heard a text message tone or vibration but there is no message in actual”. This is a mental disease.

This is the psychological and behavioral disease that is spreading very quickly in teenagers and all youngsters who use their cellphones extensively. I am cetain that more than 90% of the population doesn’t know that what Textaphrenia actually is. This is the main reason that they are satisfied and do not stop themselves from getting into this addiction.

Proper awareness should be given to the youngsters to avoid this disorder because it can have serious repercussions and can also disconnect one from your society due to strange and annoying unacceptable behavior.

These are some sentences which can explain  Textaphrenia in a more plausible manner.

”Waiting for a text back, then realizing you never sent yours! Textaphrenia”

“I Have Textapherina. . Either I Hear My Phone Ring, I Check It Every Thirty Seconds, Or I Feel It Vibrating When It Really Isn’t.”

From the above sentences you might have now understood that what is this Textaphrenia disorder and that it can really effect you and your life.

Textaphrenia has many definition which may vary from person to person.  Some people may define it as “Text messaging disease”.

“Thinking that you have heard a text message tone or vibration but there is no message in actual”.

These are the two mainstream definitions of  Textaphrenia which just tell us what the disorder is exactly like on the surface. You can also share that how you will define Textaphrenia as per your own experiences or knowledge.

How to check whether you are suffering from Textaphrenia or not?

Frankly, there are very less people who know about Textaphrenia. Because many people do not know about it so that implies that they don’t know that whether they are suffering from this disease or not. There are many assessment methods for the confirmation of this particular disease. I just read about a person saying that He felt vibrations in his pocket even when he had his cellphone in his hands. This is the worst type of Textaphrenia according to me. There are many other stories also like this.

Some of the general assessment methods are as follows. :-

If  you check your cellphones and you have message for about 8 times and no message about 2 times then you are going to suffer from this disease in the near future.

Many people keep their cell on silent mode but they still hear their text message tone. Some people think that they have got a text message when someone else’s cellphone rings or vibrates.

Because of this disease being so new there has been no extensive research in this regard. And for now the only possible cure which is in sight is to limit the usage of cellphones. New age disease like Textaphrenia are a sign of the unhealthy technological habits that we people have nowadays. And self control seems the only plausible cure as of for now.