The mobile download speeds were relatively flat in India, fluctuating between 10.63 Mbps and 11.18 Mbps during April-September 2019. While mean fixed broadband download speeds in India rose by 16.5% during the last two quarters

Ookla, the company behind Speedtest, today released its report examining the recent trends in the Indian telecom market during the last two quarters. According to the findings of the report, mean fixed broadband download speeds in India rose by 16.5% during Q2-Q3 2019 and topped 34.07 Mbps in September.

India is the leader in mean fixed broadband download speed amongst other neighbouring countries with Bangladesh at 24.02 Mbps and Pakistan, with flat speeds between 8.54 and 9.14 Mbps. The report highlights that with Reliance Jio’s rollout of its new GigaFiber service in India in early September, the fixed broadband speeds will continue to increase country-wide.

As per the report, the mobile download speeds were relatively flat in India, fluctuating between 10.63 Mbps and 11.18 Mbps during Q2-Q3 2019. 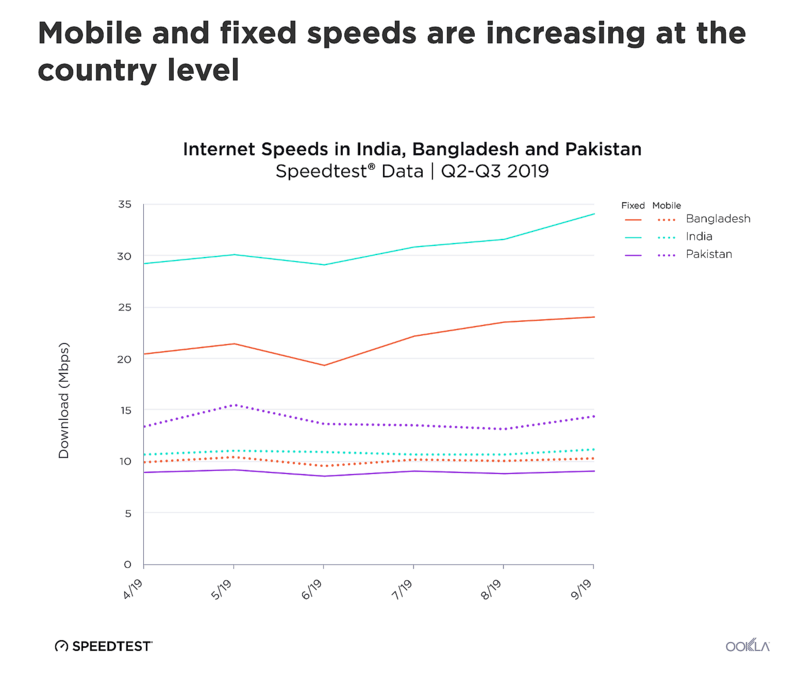 Regionally, India’s mobile performance is marginally faster than Bangladesh’s, which saw average speeds max out at 10.43 Mbps, and somewhat slower than Pakistan’s top speeds of 15.55 Mbps.

The full report entitled “Exploring recent trends in the India telecom market”, is available at the URL: www.speedtest.net/insights/blog/india-telecom-market-2019/.

Ookla compared coverage data for over 231,274,713 samples from Speedtest Android users across Indian mobile operators in Q2-Q3 2019 to benchmark India’s 4G Availability against other markets in the region.

So guys what Internet Plan are you using these days? Do let us know your thoughts in the comments below! Comment with your Internet service provider name and your broadband speed, if you like our content then feel free to support via subscribing to us!