ACT Fibernet, one of India’s largest wired ISPs (Internet Service Provider), today released its State of Internet Traffic Trend findings. The data is based on overall traffic data measured from February – April 2020 and outlines key trends on data consumption and internet usage during this period.

A surge in internet traf?c:

According to the findings, there has been a 40% increase in peak traffic in March. One of the most interesting revelations that came from the findings was on a particular day in March for the first time, 98.7% of entire ACT Fibernet subscriber base was concurrently online. ACT Fibernet has been witnessing a surge in demands across all major cities including Tier II markets.

“Stream and work” – The new mantra

With respect to the usage of streaming and OTT platforms, weekday traffic is almost as high as weekend traffic. While there has been an overall surge of 55% in streaming traffic and there is no significant difference between weekday and weekend streaming and/or traffic now. There is an overall traffic increase by 73% on weekdays and a 65% increase on weekends.

“The demand for broadband data started rising from early March and spiked when the nationwide lockdown was announced. In the last two months, we have seen a significant shift in data consumption across cities as people moved to work from home, spending more time streaming content, indulging in online gaming, taking online classes/course, video conferencing etc. A particular day, we have recorded ~1.5 million customers concurrently logged in on our network at the same time – showcasing our network strength. The data and statistics we have collected showcases how home broadband has played a critical role in keeping people seamlessly connected during this challenging time. Our work from home Offer of providing Free 300 Mbps speed upgrade and unlimited data has been really well received by customers enabling them to continue with their work-life productively.“

We remain committed to meet the needs of our customers and ensuring their safety and wellbeing. Our network is future-ready to scale up significantly and we will continue to do so to meet growing demands.” 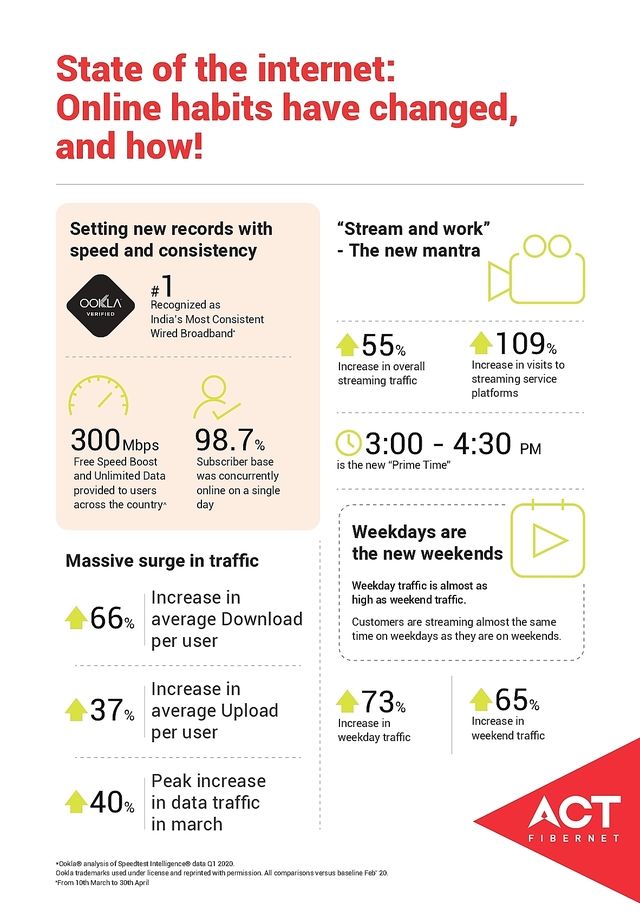 The data and statistics presented here are gathered from 19 cities the company has a presence in India. Recently, Ookla recognised ACT Fibernet as India’s No.1 Most Consistent Wired Broadband provider.

ACT Fibernet, one of India’s largest wired ISPs (Internet Service Provider) in India. ACT Fibernet is headquartered in Bangalore and has operations in 19 Indian cities with 1.5 million customers. ACT Fibernet is known for its cutting-edge technology and high-speed broadband connectivity that the company provides to its customers.

ACT Fibernet was the first broadband service provider to bring 1 Giga speed connectivity in India to the city of Hyderabad in 2017, followed by Bengaluru and Chennai in 2018.