Ah iPhone, the epitome of classiness all over the world.One of the biggest status symbol of the 21st century. Apple’s iPhone is everything humanity ever wanted, and it will complete its 10th anniversary this year.It’s natural that people are eagerly awaiting the release of the latest variant of IPhone, iPhone 8.Well to the dismay of the enthusiasts, the release of the new iPhone 8 has been delayed yet again, which has resulted in a bunch of new rumours about the new iPhone. So what’s the fuss is all about and how true are they? We will try to dissect them all here in our list of most bizarre iPhone8 rumour. So starting with the most believable one-

According to some reports, the new iPhone 8 will support Optical TouchID, which will be built on its OLED display. This will let user unlock their device by touching anywhere on the screen, the screen working like a fingerprint scanner.

Another rumour spreading among the fans is that Apple may give their iPhone 8 built-in AI chips. Bloomberg’s Mark Gurman reports that the chip is known as the Apple Neural Engine, according to an insider “familiar with the matter”. This rumour, however, might just turn out to be true. With the increasing AI devices all over like the Google’s I/O, Apple will certainly want to jump in the mix.The question that remains is, can the chip make Siri less snobby? 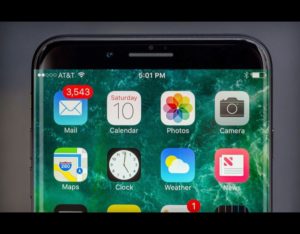 We’re not saying it, the rumours are.The curved display, made famous by the Samsung Galaxy series might soon be coming to the new iPhone 8, and I must say it’ll look damn good in here. Curved displays are the future of smartphones, and Apple definitely won’t like to be left behind in this matter.

Another rumor roaming around about iPhone 8 is that it will be a glass body, much like the old iPhone 4 instead of anything similar to iPhone 7. It will also ditch the iconic home button for bigger screen size while maintaining the physical dimensions, leading the screen right up to the edges, and beyond that, and according to analyst Ming-Chi Kuo, the glass will be built around a polished stainless steel frame that’s similar in design to the Apple Watch.

One of the more plausible possibilities regarding the new iPhone 8 is wireless, and there is a high chance of it being true. The reason for that is: In February, Apple joined the Wireless Power Consortium behind the Qi system, but the iPhone’s wireless charging could support PMA as well. The addition of wireless charging would also explain Apple’s move to using all-glass casing, another previously rumored feature. Even though some metal and plastic smartphones have wireless charging, using glass is faster and there are fewer frequency disruptions.

Apart from these, there are several other rumors going around like OLED display, 3D cameras, Facial recognition etc, but by far the most bizarre rumor we heard till now is from the famous iPhone conspiracy theorist Robert Scoble himself, which is-

If this really happens, you read this here first, but we don’t take the credit, or blame for such a high class of rumor. Maybe the glass body is left a transparent by the makers, thus fulfilling our prophecy, who knows? But the rumor is high and there is always a chance with Apple, however slimmer, so who knows?

So that’s all from us, if you’ve any queries, comment down below for answers