In this age of technology, everyone wants better quality. Be it in pictures, videos, movies or games. Higher quality leads to demands of higher storage limit SSDs. It is no wonder thus that SSD markets have such great and intense competition these days. To heat up the market more, Kingston and Sony have released new models of their SSDs simultaneously in the market.

So what’s exactly is so good about these SSDs? Well, a lot to be precise. 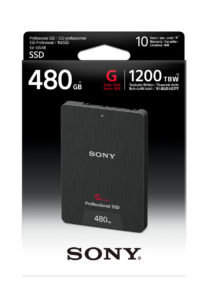 Using Sony’s Error Correction Code technology, the 960GB G Series SSD achieves up to 2400 TBW (terabytes written), while the 460GB drive can reach 1200 TBW, resulting in less frequent replacement and increased ROI. 2400 TBW translates to about 10 years of use for the SV-GS96 if data is fully written to the drive and average of five times per week.

High endurance with up to 10 years lifespan

When paired with the necessary connection cables, the new G Series drives can be effortlessly removed from a recorder and connected to a computer for file downloading, making editing easier and faster with read speeds up to 550MB/s.

G Series SSDs offer data protection technology that keeps content secure and intact, even if a sudden power failure occurs.  Adding to the drive’s stability, it features a durable connector which withstands extreme repeated insertion and removal up to 3000 times – or 6 times more tolerance than standard SATA connectors – even in harsh conditions.

There will be two models of new Sony G Series.

KC1000 is the perfect solution to meet the needs of media and design professionals, gaming enthusiasts and anyone who needs ultra-low latency storage performance to end data bottlenecks. This native NVMe device offers one of the industry’s most powerful storage solutions for high-resolution content delivery, virtual reality applications, accelerated gameplay or a competitive edge for the creative professional on tight deadlines.

KC1000 delivers up to 290,000 IOPS and will ship in mid-June in 240GB, 480GB and 960GB capacities. The high-performance SSD supports the PCIe Gen3 x4 interface and the latest NVMe protocol. KC1000 provides accelerated boot and load speeds and increases sequential read/write performance, as well as offering improved endurance and energy efficiency. It is perfect for users seeking instant, breakthrough performance improvements for:

Both the companies, Kingston and Sony have made considerable improvement in the SSD department. While Sony had concentrated more on professional photographers, Kingston is more of the all-rounder here. Both the options have their merits and demerits. It will be fun to see how the market reacts to the new advancement in the technology.

So that’s all from us, if you’ve any queries, comment down below for answers