Google recently launched its Chromecast, a popular device worldwide and also in the Indian market and we covered that news in our previous article (Chromecast launch). And we promised you that we will give a complete review once we get our hands on the device which we finally did. So read on the full review of Chromecast.

Good- The Google Chromecast is very cheap, really very cheap compared to its rivals and the dongle can stream from Netflix, YouTube, Pandora, Google Music, Google Movies & TV, and HBO Go to your TV using Android or iOS tablets as remotes. The small size ensures that you can carry it anywhere and tuck it neatly behind your TV for use.

Bad- There’s a lack of supported apps for now and also a dedicated remote which means that you’ll always need a smartphone nearby. Also the screen-mirroring feature doesn’t work as well as it should.

Design: A stick for streaming

As a device, the hardware of Chromecast isn’t anything breathtaking and there isn’t anything as such special, just a 2 inch long dongle the Chromecast is. But it will solid in your hands, like really solid. It’s also compact enough to occupy minimum of space while taking over one of your HDMI input on your TV and wont block the way for other devices. Even if it does then Google have included an HDMI extender cable generously. The matte-black finish ensures enough of a texture to make it easily grippable, so that you can easily remove this after using and take it with you while travelling. Also there is a reset button which is very tiny and will reset your device to its factory settings in case you mess up with some settings. So the design is fine enough for a device that will live behind your pc.

There’s is a little catch though, that the Chromecast requires a power source to work. Which I can bet you didn’t know because very easily hid this in all their advertisements of Chromecast. So this handy Chromecast isn’t really just a dongle but is still very much handy.

Setup: Up and running in minutes 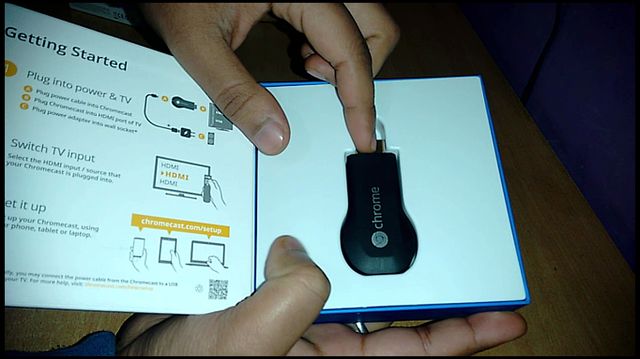 Google Chromecast is called as a plug and play device and that’s how Google advertise it too, and well Chromecast really is a Plug & Play device.

After connecting it or plugging it to TV, it will prompt you to visit online setup using your smartphone or tablet or laptop and there you will need to install the Chromecast setup app which will take a little time but it’s step by step, so no confusions over there. There are also a lot of illustrations which will prove to be helpful on your way.

But behind this initial setup, Chromecast is doing something else too, it is creating a very own local hot spot for itself for the initial setup, but you need not worry about that. These technical details are hidden from you and the most that you may have to do is to have your Wi-Fi password remembered. If you’re installing it on the laptop then the final step involves installing the Chromecast extension after which you are ready to use it. While you can take the painless setup for granted but you will have to give credits to Google to make it this easy.

After you’re done setting up the Chromecast then you can use your smartphone or tablet as a remote to choose from and listen and watch to content from a no of sources like Netflix, YouTube, Pandora, HBO Go, Google

Music,   VeVo,  Plex, Hulu, and Google Movies & TV. In all of these apps, you’ve to simply press the “Cast” icon and select your Chromecast , and the video will get sent to your TV,’

After the Video gets playing, you can use your smartphone or tablet as a remote for your Chromecast. You can pause or play the content, or using the scrubber at the bottom to skip forward or back and even volume can be controlled using your phones volume keys but that will control the internal volume of Chromecast only and not of TV. So the TV remote is not as useless till now. You will need that for master volume control. Also another good thing here is that any compatible device on the network can grab control of Chromecast and make changes so it become very enjoyable to have a group of people sharing videos in your TV.

The quality of videos from Google Movies & TV, YouTube and Netflix was also very good, excellent as to say and as good as you will expect from a streaming box. So there won’t be any compromise on the streaming with this stick.

When pushing all of our interaction to Chromecast to smartphones and tablets, one surprising result that we get is that the Chromecast doesn’t really have much of its own user interface.

And that’s the truth too, under the hood Chromecast doesn’t have enough fire power to say run a video natively on a full HD screen, most of it’s work is done by the cloud and it’s a smart device and thus capabilities can be increased just by increasing the network based functionality.

So when you’re not streaming, the Chromecast won’t do anything much than displaying some beautiful photos of nature and status information, and so, can’t navigate to apps or select any content from your TV directly. What this means is that there’s no way to use the Chromecast as a “standalone” device – you will always need to have a smartphone or tablet handy. For households where not everybody has a smartphone or mobile device which is quite common for the Indian households, a Chromecast may not be the best choice.

Good for some but still needs time for masses. Very useful for Android lovers.

To be honest, the Chromecast is not the best streaming device and maybe not as capable as others but it’s a very very useful device for anyone who wants to stream media quickly and access it anywhere. Anyway for a Google fan or anyone who uses Google ecosystem, there aren’t too many options other than buggy Google TV or the infamous Nexus Q. You can easily watch Google Movies & TV content or listen to Google Music anywhere you want to like even in your Living room and it won’t even cost too much so budget friendly too.

Though don’t expect too much as this little device has its own limitations and they are quite a few, Chromecast can’t really replace your streaming device for forever, it’s not for everyday uses.

Where to buy the Chromecast?

Right now the Chromecast retails for a price of INR 2999 on Snapdeal exclusively and people who want it shipped from outside can also order from Amazon.

So that’s it from us, a review for Google Chromecast, for any queries, comment below and keep reading Inspire2rise.

Keep visiting for more awesome gadget reviews, articles and remember we cover, “Everything under the Sun!”