Negatives – Too big in size, no expandable memory.

Google launched their flagship device Nexus 6 recently, an upgrade of Nexus 5 which is not just an upgrade. The first Plus- size Smartphone from Google which is a Motorola made device which can do anything and everything. The device is quite big and bigger than almost all other smartphones in market but then calling it just a smartphone will be an understatement to be made for this beastly phablet.

The device is really powerful and capable of everything and the design makes it somewhat easier to use despite the huge size.

The latest android version Lollipop makes it all more delicious for use. The buyers will get the Android Lollipop in its full capacity so they will surely love the device more. Let’s talk a little more about its features and design in our Motorola Nexus 6 review price and specifications post.

Motorola Nexus 6 review price and specifications in India : THE REVIEW! 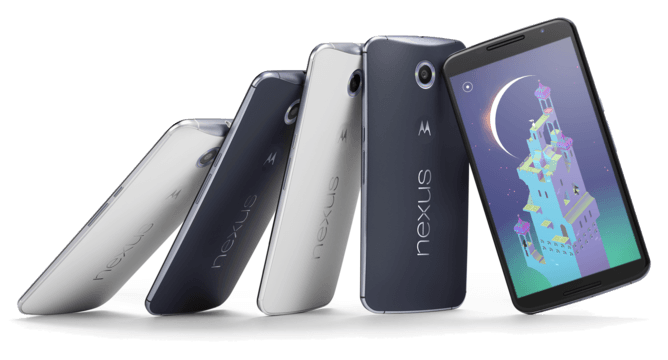 The size makes it difficult to use the Nexus 6 with one hand and you need both the hands to properly operate the device though with time you will get used to it. The Nexus 6 is Motorola made and you can see this in the design as it looks like an extra large Moto X in first look and you can tell really differentiate between them.

In case you’re worried if this will bend too then here’s a good news. The body gets aluminum frame supporting it, so no #bendgate folks! 😛

The Nexus 6 with a body without any physical buttons weights 184 gms which is a little more than Apple iPhone 6 plus. But if you can fit that iPhone in your jeans then you can fit this too. Though it get difficult to remove sometimes!

See more: Android Lollipop : “The sweetest thing you will have this winter”

The body doesn’t look as premium as a device of this caliber should look. No it’s not cheap in any sense but it could have been better.
The colors available are only 2 – Midnight Blue and Cloud white. So not much customisation unlike Moto X which had the whole plethora of options. We hope the Moto maker gets working for this device too!

The 3.5 mm headphone jack is at the top of the device just like Moto X but along with the nano sim slot. Though there isn’t any SD card slot so you’re struck with 64 or 32 GB of storage.

Nexus 6 have a screen 5.96 inches in size which is maximum you will get in international market for smartphones. An inch bigger than last year’s Nexus 5 and the biggest iPhone – iPhone 6 plus.
It is super AMOLED and gorgeous. With a screen resolution of 1440 X 2560, Google gives you around 493 pixels per inch so it’s really bright and colorful because it’s Quad HD.

A comparison between Nexus 6 and its competitors on screen front-

Nexus 6 boasts off of a 2.7Ghz Qualcomm Snapdragon 805 quad-core processor that has an Adreno 420 GPU. It’s a top-of-the-line chip for Google’s largest Android phone yet. To support this is a large Ram capacity of 3 Gb which is backed by 32 and 64 Gb of internal storage. Mouth watering isn’t it?

Nexus 6 have a 13 Megapixel back camera with Sony IMX214 CMOS
sensor with a wider f/2.0 aperture and optical image
stabilization. The camera is not perfect but compared to Nexus 5, we may call this terrific.

The OS in Nexus 6 is Google’s latest flagship Android 5.0 Lollipop.

The Nexus 6 also supports turbo charging by Quick charge 2.0 technology making the charging of device an easier and much faster process.

With 3220 mAH, the battery life of Nexus 6 can be termed as excellent. Though it’s same as iPhone 6 plus and Samsung Note 4, it still performs better than them because of the OS i.e. Lollipop which saves the battery by at least 2% with its battery saving option which was the part of the Google initiative called ‘Project Volta’. The battery however is sealed inside the Nexus 6 as it is non removable.

The Nexus 6 is great for watching HD videos and Games. The screen is capable of handling the intense graphics which will mesmerize you. Sound quality is good too which makes the media performance of the device exceptional.

The specs of the smartphone makes it faster than its contemporaries though it might not necessarily be the fastest one among the current lot. The browsing downloading and uploading speed experienced is good enough for normal/heavy usage.

Pictures taken and videos made on the 13 mp camera are decent and they give tough competition to other devices with cameras of even 21 MP camera quality.
The device is really really fast and Android Lollipop gives you a pleasurable experience.

Calls made are crystal clear both in indoor and outdoor environment. They don’t drop, voice remains clear and it is an overall satisfactory experience.

Google Nexus 6 comes pre-installed with the latest version of android Android 5.0 Lollipop. One of the best thing about Google devices is that OS we receive is in its purest form without any cluster of pre-installed apps. Lollipop is great. Simply best at this point. The OS will completely change the experience you had till now of android. Writing about it here will lead me away from our topic so you can read more about the Lollipop here.

Motorola Nexus 6 review price and specifications- Pricing and where to buy?

You can buy the device which is now listed on Flipkart for pre-order for INR 44K. You can buy from the below link which will take you directly to the product page.

To Be precise,  the device is large, larger than any other phone out there, so it is difficult, in fact impossible to use this phone with only one hand. You need to use your both hands which can be difficult but with the features included, it’s worth the pain. The processor and ram is fine but only and only if the memory was expandable. 64 Gb limit can be a little obscure for those who love their HD games and Videos and can’t compromise with less.  The design and body is good and the phone Looks great but still its not a premium device.  The positives are many and the biggest is Lollipop.  The os in its original form is easily the best you can have right now. The camera is great too and you won’t be disappointed by the phone. The price though,  it is priced at $650 in US which according to me is a little more. But given all the features it have and competition the device will face,  you can be sure of this being One among the top 3 devices around. I will give it a 8/10.

Keep visiting for more awesome device reviews and articles and remember we cover, “Everything under the Sun!”