The Xiaomi Redmi Note 7 Pro had been a game-changer for Xiaomi. It revitalized what the brand stood for and brought forth a fresh perspective to the market by providing a lot under a certain price point. It was one of the first smartphones under 20K INR price bracket to come with the 48 MP Sony IMX 586 sensor. The smartphone wasn’t a slouch in any other department as well and it still is one of the top-selling smartphones in India. It’s been a few months since the Note 7 and Note 7 Pro launch and we already have news about the Xiaomi Redmi Note 8. Read on to know more about Xiaomi Redmi Note 8 specifications and price in India. 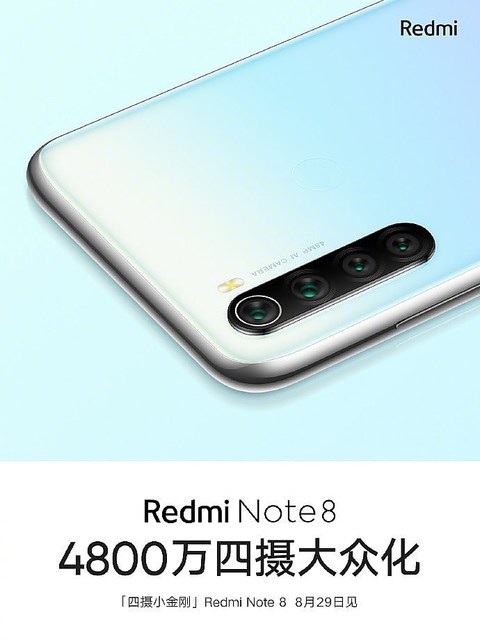 Xiaomi Officials said that 7 months ago, Redmi Note 7 brought the 48-megapixel camera sensor to the price of 10K INR. This time, they have brought to people the brand new Redmi Note 8. It will come with 48 MP main and a total of four camera sensors. Super clear main camera + super wide-angle + depth of field + super macro four lenses. On August 29th, the Redmi Note 8 series new product release conference would be held in China.

The internal hardware specifications were also made known this morning. The officials also announced the processor information of the Redmi Note 8 mobile phone. The phone will be equipped with an 11nm Qualcomm Snapdragon 665 processor, clocked at 2.0 GHz. On the other hand, the Redmi Note 8 Pro may come with the Helio G90T chipset which was announced earlier.

Finally, the Redmi Note 8 series will be officially unveiled on August 29, and the price and detailed configuration will be announced then. In addition, the RedmiBook 14 notebook enhanced version with Intel’s 10th generation processor will also be unveiled at the event.

The Redmi Note 8 will definitely be a great product at the 10K INR price point. But the real competition and market value may come in the form of the Xiaomi Redmi Note 8 Pro which may be the most powerful smartphone that we get to see in its particular price range.

So guys are you excited for the Redmi Note 8 series? Do let us know your opinions on this topic in the comments section below! You can also subscribe to our YouTube channel for more detailed tech coverage on a lot of topics!